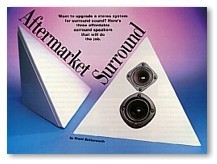 In a lot of households, certain members consider any new piece of hi-fi gear unwelcome, even if it's an unobtrusive little white surround speaker jutting out from the wall. One of the most noteworthy attempts to get past this problem comes from PINNACLE®, which has designed a surround speaker to fit perfectly into the upper rear corners of your home-theater room. In place, the Pyramid looks like a more tasteful version of the Led Zeppelin posters I used to tack up in the corners of my room--it completely fills the corner, but because it's white, you barely notice it (assuming you have white walls).

It actually takes less time to install than a Led Zeppelin poster, too. Just sink an expander bolt or a screw into your wall and hang the speaker from it. The connectors are in the rear, and they leave no room for chunky wire like the XLO. Instead, I used some slim, white zip cord to hook up the Pyramids. I just ran it right in the corner from the baseboard to the speaker.

We got a real chuckle out of the Pyramid when we pulled the grille off--it's one of the few speakers we've ever seen with a tweeter that's almost the same size as the woofer! Given its appearance, I didn't expect the Pyramid to sound great; 2-inch tweeters seldom go very high,
and 3-inch woofers don't go very low. But in a modest Pro-Logic system the Pyramid makes an excellent showing. The speaker easily and cleanly reproduces the 100 Hertz to 7 kilohertz range of Pro-Logic's surround channel.

What's really great about the Pyramid, though, is its dispersion characteristics. Much of its sound bounces off the walls and ceiling surrounding it. As a result, you get a nice blend of the big, diffused sound of a dipole speaker, and the focused sound of a conventional,
direct-radiating speaker. And after using dipoles in my system for so long, I really enjoyed having the speakers further back, so that sounds moving from the front speakers to the surrounds move past you, instead of just diffusing into the back of the room. I'd like to see a somewhat bigger, more full-range speaker of the same design as the Pyramid--it might be the perfect surround speaker for AC-3, where the debate over dipoles versus direct-radiating speakers for the surround channel seems destined to go on forever.