Choosing between two exciting options from Yamaha’s popular HS line of studio monitors can prove to be a tricky endeavor, especially if you’ve never used them before. However, one way to approach this would be to compare the various features offered by the two in a bid to determine which one has the edge.

The Yamaha HS5 is the smallest monitor in the HS series and will comfortably fit in a small studio while offering a decent amount of power to help out any novice music producer. Yamaha HS8, on the other hand, is larger and offers a notably higher volume output.  Also if you look for a Yamaha HS7 vs HS8 Version click here.

But given the choice between the two, which one would you rather have?

The challenge here is aside from the size, both monitors have the same onboard features and they practically look the same. So, to figure out the better option, we will pit the Yamaha HS5 against the Yamaha HS8 by comparing various aspects of their functionality and overall performance. 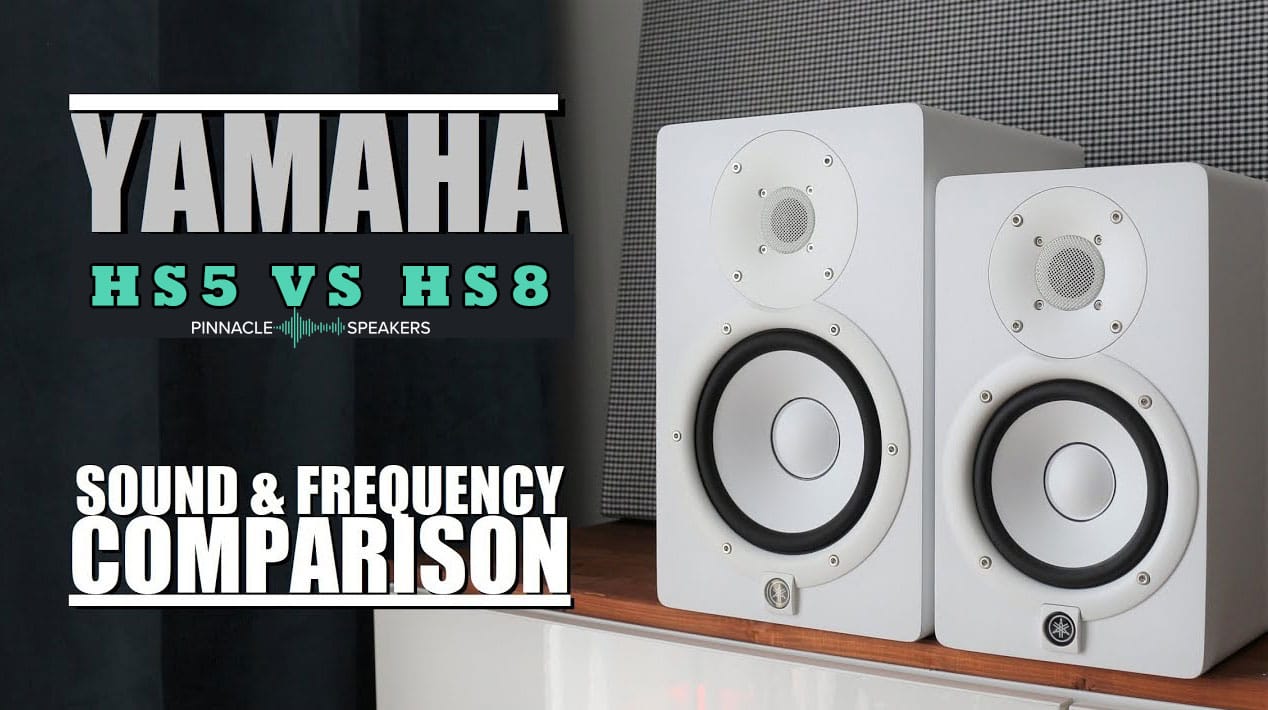 The design of a monitor not only influences its overall aesthetics, but also the ultimate quality of sound that it produce

As  mentioned earlier, the HS5 is the smallest iteration in the 3-speaker HS line and will be great for confined spaces. The monitor measures 6.7 by 11.2 by 8.7 inches, which allows for flexibility when you want to install it. It also weighs a mere 11.7lbs, which makes it even easier to handle during setup.

The design of the frame is smooth and contoured that minimizes sound loss to enhance the high-frequency details with exceptional accuracy. Meanwhile, the extra thickness of the tweeter frame further reduces resonance which may downplay high-end clarity.

The HS8 is the largest of the three Yamaha HS series studio monitors. Despite this, it maintains a portable design that won’t pose a great task come installation. The monitor measures 14 x 16 x 21 inches and almost doubles the weight of the HS5 , 22.5lbs.

Just like its counterpart, the HS8 features a smoothly designed tweeter frame that is coupled with a thickness that eventually results in extraordinarily accurate response as far as sound quality is concerned.

There really isn’t any significant difference between the designs of the two HS monitors that would make a user favor one over the other. Because of this, there is no particular winner; it’s one-all!

The engineering around a speaker could be the difference between good and bad quality reproduction. It influences the level of balance between low and high-frequency sound production for a desirable overall audio quality. 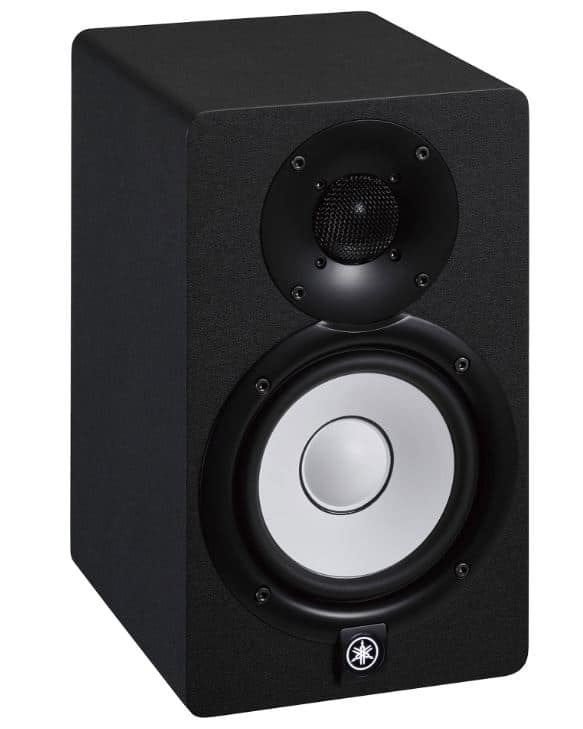 The HS5 has a white-cone design that is unique to the Yamaha HS line of monitors and delivers superior audio quality. Housing the speaker is a solid black frame that protects the electronic parts for long-lasting performance.

A carefully engineered mounting system featuring a series of screws and a special mounting rim is used to eliminate vibration and resonance. This results in a full sonic sound that producers look for in a studio monitor. A large magnet has been incorporated into the speaker to enhance the accuracy of sound produced.

The Yamaha HS8 is essentially a replica of the Yamaha HS5 as far as the build is concerned, only that everything comes in double the size! The white speaker cone design has been maintained on the HS8, and the same is true for the durable frame of the monitor.

Setting up the HS8 is also a straightforward process for anyone with some experience pertaining to setting up studio monitors. The special mounting system also helps to deliver excellent audio quality.

This is yet another category that doesn’t clearly illustrate the difference between the two studio monitors. It will be difficult to pick a clear winner based on this, so we have another tie.

Good audio quality from a monitor is what enhances the user's capability to produce top-class stereo. The best monitors are those that come with drivers to separately reproduce the high and low frequency sounds separate and eliminate their interaction.

The HS5 is a bi-amplified monitor speaker that separately amplifies the high and low-frequency sounds for the perfect balance and high sonic quality. The HS5 has a 45W amplifier for the tweeter, plus a 25W amplifier for the woofer, resulting in a total amplifier power of 70W.

It can also handle sound frequencies between 54Hz and 30kHz. This means it’s best suited for music genres that emphasize the high-frequency sound. With a smaller 5-inch speaker cone, the Yamaha HS5 does not produce a high-volume output, especially for bass sounds.

Because of this, the monitor will not offer you the level of quality you’re looking for in a large studio space. But if you just converted the spare room in your house into a studio, then this should be the monitor for you. 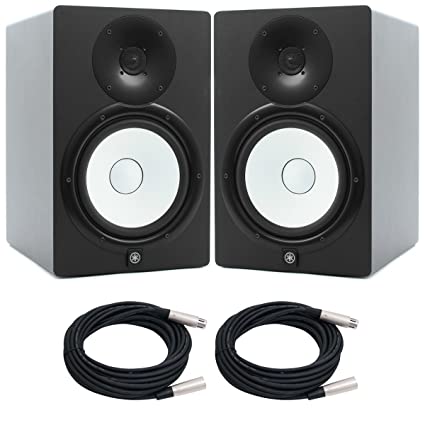 The Yamaha HS8 produces significantly better-quality audio than the Yamaha HS5, and this is where we get to see the benefits of the larger size. The 8” woofer on the HS8 enables it to produce exceptionally good low-frequency audio, with a higher volume output in general.

The speaker will work well in large room studios, although it may be a tad too noisy in confined spaces. The bi-amplification system on the HS8 consists of a 75W LF, plus a 45w HF amplifier to result in a high-performance 120W power output.

The HS8 can also handle frequencies between 38HZ and 30kHz, meaning the bass sounds are better pronounced than on the HS5.

The Yamaha HS8 boats a well-matched amplifier and woofer combination, which results in better-than-expected bass response. It is the clear winner as far as sound quality is concerned!

The presence of sufficient onboard features allows you to tweak the monitor for the best response, regardless of where you choose to set them up.

You get a great variety of inputs on the Yamaha HS5 that help to provide speaker placement and room-matching versatility with the ROOM CONTROL, HIGH TRIM, and MID EQ response control switches. These have specially been designed to compensate for acoustic deficiencies, as well as monitoring needs.

Furthermore, you'll find great use in the XLR and TRS input connectors, in addition to a power indicator

Just like the Yamaha HS5, this monitor also comes with XLR and TRS ¼” Jack. HIGH TRIM enables flexibility in control of high-frequency sound response while ROOM CONTROL allows you to reduce exaggerated and unnatural low-end sound that will usually happen when the speakers are positioned next to walls.

Included is also the MID EQ switch to give you a subtle midrange boost and a power indicator.

Both the HS8 and HS5 come with similar onboard features to allow for optimum sound response in any room you choose to install the monitor. However, these are better utilized on the HS8, which is also our winner. 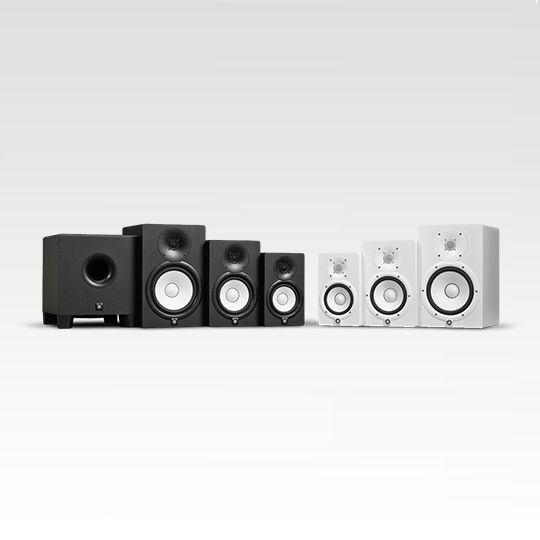 The price is always an important factor when considering any product to buy. You’ll be more comfortable spending on merchandise if it's within your financial reach.

The smaller monitor is also the cheaper of the two options. This monitor will cost you just under $200, which is quite affordable for a big-name brand like Yamaha and should be within the reach of most music producers.

The Yamaha HS8 will cost you almost double what you will pay for the HS5. It is a pretty pricey monitor and would be more suitable for professional music producers looking for the best products in the market.

With almost double the cost of the Yamaha HS5, the HS8 studio monitor may be out of reach for up-and-coming music producers. Hence, the HS5 takes the day! 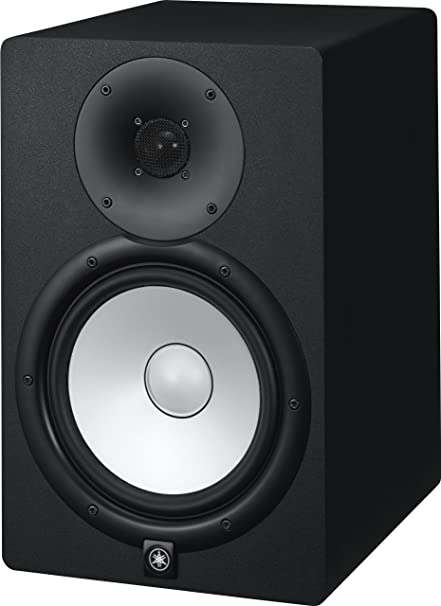 The Yamaha HS line of studio monitors has proven to be a godsend for music producers looking to take their craft to the next level. Generally, they offer you the same kind of features as far as design and set- up are concerned.

The major difference is revealed by the quality of sound production, whereby the larger unit offers a better balance of low and high-frequency sounds compared to the smaller one. This is what makes us pick the Yamaha HS8 as the overall winner in the duel pitting the HS5 against HS8.