Ever since their advent, home studio monitors have become an integral part of the music produced today because they take the listening experience to a whole new level. We can even go a step further to say that the studio monitors present an honest and clear picture of the quality of music being produced.

Yamaha studio monitors are a particular favorite among audiophiles and music lovers generally, and the HS studio series is one of their leading products. The HS monitors came into being after the manufacturer seized production of their prized NS10 way back in 2001.

The Yamaha HS line includes three different monitor models; HS5, HS7, and HS8. Out of these, the HS7 and HS8 are extremely popular and users basically look at them as worthy rivals!

The Yamaha HS8 and HS7 are pretty similar in many ways but their differences can also not be disputed. Both designs are uniquely suited for specific users, situations, and genres, and this is precisely what makes them fierce competitors along various lines.

In this post, we will explore the differences and similarities that exist as far as functionality is concerned to help you make an informed choice in case you find yourself torn between the two! 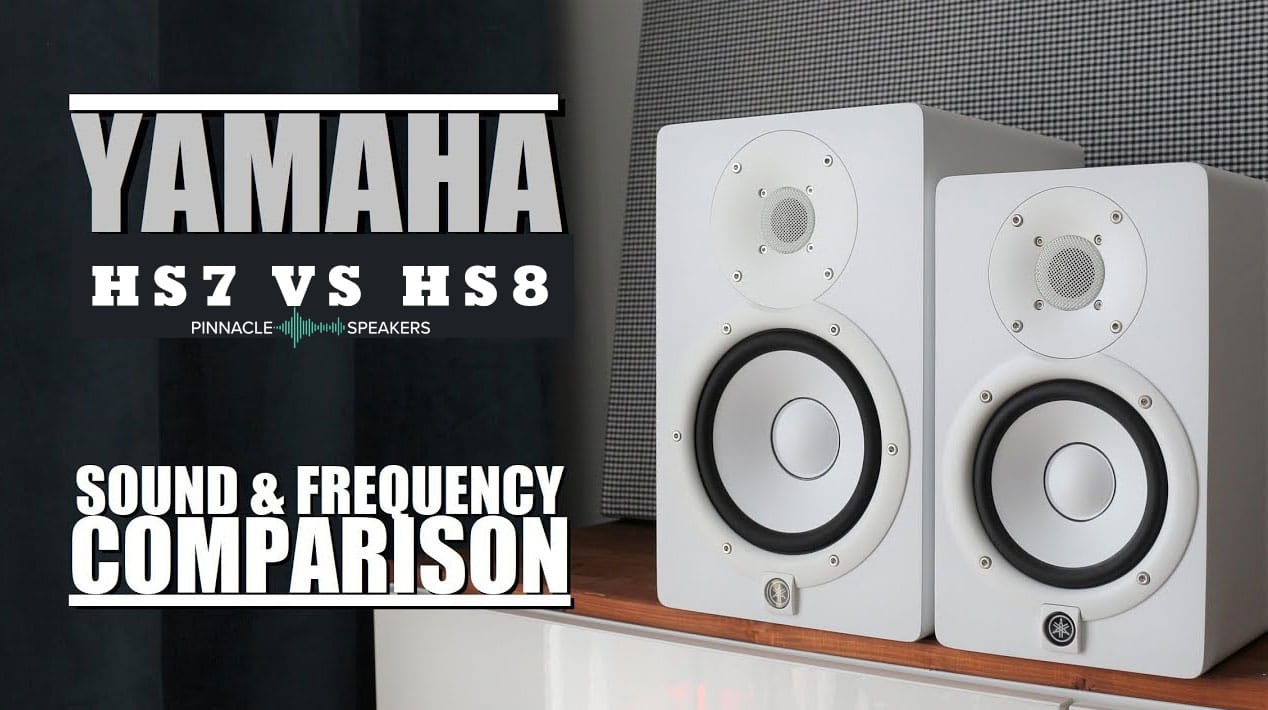 The design of the studio monitor ultimately affects the quality of music that comes from it. For instance, an angled design can eliminate resonance, and simultaneously improve the precision of sound production. Elsewhere, a closed cabinet design on a studio monitor chokes the bass and makes it sound quieter than it is.

In terms of physical attributes, the Yamaha HS7 measures 14.4 by 12.6 by 19 inches, which is relatively smaller than its counterparts. This also means that it weighs less at 23.1 pounds, which may be advantageous if you’re using a confined studio space. The monitor has a mesh grille that protects the tweeter, something that was borrowed from its inspiration, the NS10.

Furthermore, its ported design is exclusively meant for studio monitoring. The Yamaha HS7 features an XLR and 2/4-inch TRS balanced jack for input. You get an international generic cable used to power the monitor and controlled by an on/off switch located at the back.

There is a big round volume control knob, as well as three-position switches that you can use to alter the response based on the size of your room. The settings are represented by three values, -0, -2dB, and -4dB. A ported design at the back of the studio monitor tends to bounce the sound of the wall, and this can reinforce the bass frequencies and make it sound way off, more so if you set up the speaker close to the wall. 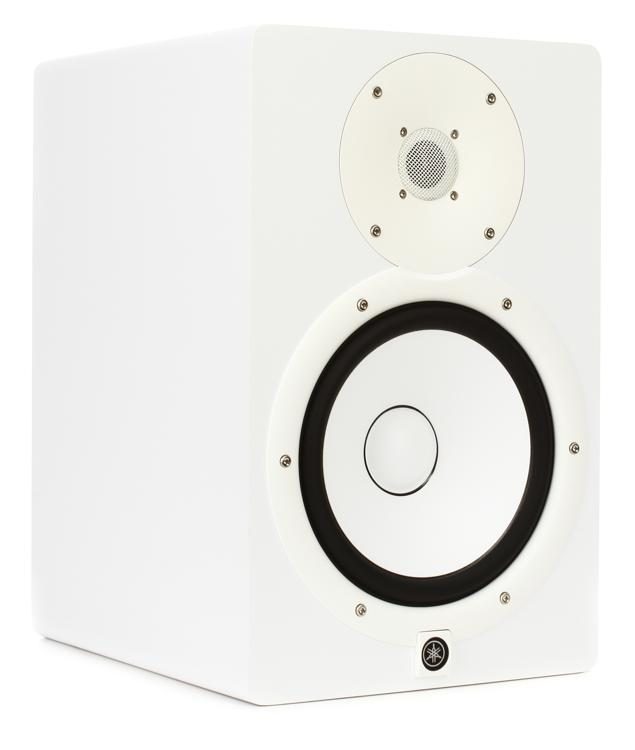 As far as looks go, the Yamaha HS8 is not very different from the HS7, although it is slightly bigger, with dimensions of 14 by 16 by 21 inches. This also causes it to tip the scales higher at 23.6 pounds. The larger and heavier design of the Yamaha HS8 compared to the HS7 could partly be attributed to the heavy bass that comes from it.

Just like the HS7, this studio monitor comes with the XLR and ¼-inch balanced jack for input to go with the international generic power cable. One major difference in the HS8 is that it has a larger 8-inch woofer compared to the 6.5-inch woofer on the HS7. This variation may not seem that significant, but it is apparently what makes the HS8 physically bigger than its rival.

So, which of the two has a better design? In truth, there is no great difference aside from the larger size and weight of the HS8. Besides, both studio monitors look practically the same and come with the same accessories for operation. Together, they have a simple and charming design that is effortlessly suited for the job.

In this regard, we see no substantial reason to pick one over the other and that’s why both monitors are winners. It’s a tie!

Build quality is important because it determines how durable the studio monitor can last and its ability to come out of occasional knocks and bumps unscathed. It also influences the convenience of installing the monitor in your room and how this affects the eventual sound reproduction.

The Yamaha HS7 comes with a solid build and quality finishing. Its speaker magnets are heavy and this allows it to last for a very long time. The ports have also been designed for maximum use and minimum sound interference by positioning everything at the back so that nothing interrupts placement or sound emission.

The study body of the speaker allows for handling without the risk of chips and dents that usually occur on inferior quality equipment.

Generally, the setup process can be done by anyone conversant with active studio speakers. One advantage of the HS7 is that it can be installed in different positions in relation to the wall, thanks to its smaller size and lighter weight, while the sound output remains rich regardless. 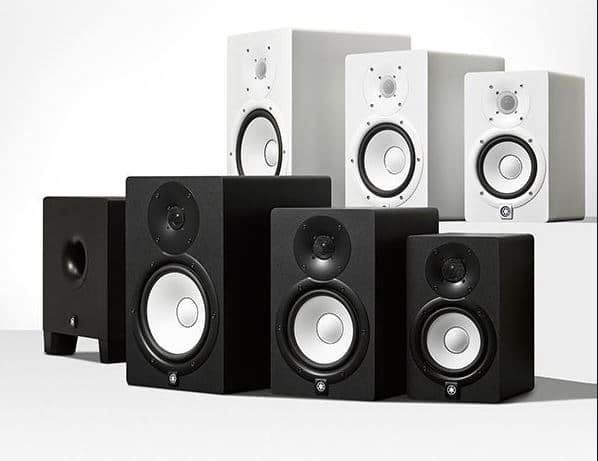 The Yamaha HS8 is pretty much identical to the HS7 as far as build quality and setup is concerned. It is also designed to last longer and features a solid finish with heavy speaker magnets. The speaker also features a straightforward setup process that can be done by anyone with the slightest knowledge of studio monitors.

The only difference is that, unlike the HS7, this speaker can’t be set up too close to the wall as the sound reproduction will be distorted. Rather, it requires a little bit of distance from the wall surface in its proximity. This may pose a problem for users with small studio spaces.

This is another category that doesn’t spell out a notable difference between the two speakers. But by virtue of the HS7 offering more flexible setup options, it gets a slight edge over the HS8!

This determines the maximum boom of the sound produced and comes in handy when you’re using a large studio space.

The HS7 features 60W LF, as well as an additional 35W HF bi-amp system. This leaves you with a total of 95W power amplification, which will be great for small to medium-sized rooms.

Yamaha HS8 comes with 75W LF and an additional 45W HF bi-amp, which add up to 120W power amplification. The HS8 produces sufficient volume output even for large studio rooms.

When it comes to sound amplification, the higher numbers get the job done. In this case, the HS8 is our winner!

Sound quality affects the listening experience and must accurately reproduce an original sound recorded. To achieve this you  need a clear sound that perfectly balances the response between the high and low sound frequencies to enjoy the music, and this is all influenced by the speaker's quality. 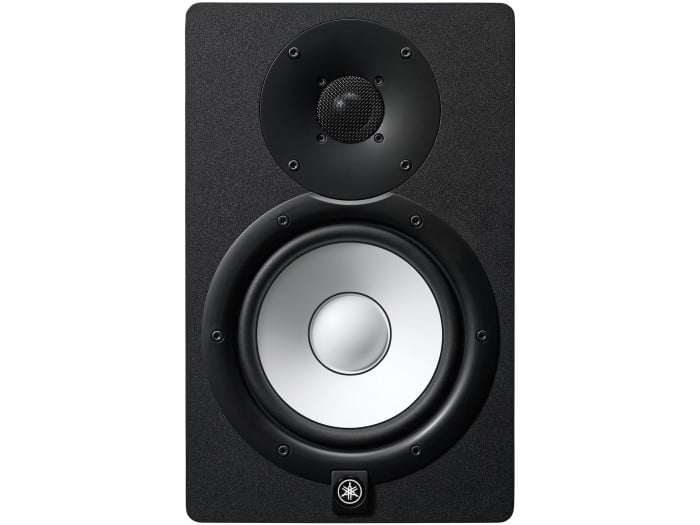 The HS7 can easily cover sound frequencies ranging from 43Hz to 30 Hz. Because of the smaller subwoofer size inside, it has a decent low-frequency response, but nothing close to punchy. However, this output level can be considered fairly good for most music genres since the bass is more direct and not really punchy.

On the other hand, the HS7 might not work for you if you’re listening to the bass-heavy type of music, such as rock or EDM. The feel won’t just be there! This means you’ll need to install another subwoofer if you’re using the HS7 in a large room for better sound amplification.

The HS8 can also cover frequencies between 38Hz and 30 Hz. It boasts a high-volume output and is known for its exceptionally great bass reproduction. This is because it has a larger built-in woofer compared to the HS7, which helps to produce a punchy bass sound.

The monitor doesn’t need to be used with a subwoofer in a large room since the volume is satisfactory. It should be your obvious choice if you fancy music genres where the bass is the major aspect, such as electronic dance.

When it comes to sound quality, the difference starts to come into play. The HS8 has a stronger sound output and generally offers the better sound quality, especially in big rooms. The HS8 comes into its own in this category, although the HS7 is not far off behind. The HS8 takes the prize!

The cost of a studio monitor will determine your level of comfort in spending on it. If you’re buying on a budget, you’re definitely going to prioritize the more affordable option but if your finances can be stretched, then you might want to look beyond the price of the monitor.

The HS7 is the lower-priced studio monitor. This doesn’t necessarily point to its lower quality; on the contrary, it is actually the more popular unit on the internet!

The HS8 will cost you $50 more than the HS7, and according to many, the extra cost is absolutely worth it. This is because the HS8 outputs music with high clarity levels. Not to mention the exceptional bass quality.

Depending on the amount of money you have in your wallet, both the HS8 and HS7 seem like a reasonable buy. So, we are going to give this a tie!

After all these deliberations, it really boils down to two things; the size of your studio and your needs as a listener. If you’ve just converted your small room into a studio, then the HS7 will be the ideal choice for you. On the other hand, if you’re a professional looking for the best performance from your studio monitor, the HS8 is the obvious choice.

But given that the whole point of buying a studio monitor is to enhance the listening experience, we have no choice but to declare the Yamaha HS8 our winner! After all, it offers more superior music quality!